The story behind the TIE Fighter

Colin felt that each ship should have a strong identity. The TIE Fighter was designed as a  mysterious ship that could be heard before it was seen. It appeared suddenly and terrorized other ships nearby. It was purposely never explained how the pilots entered or exited the ship or how it could land or take off. They were housed inside the Death Star and were a threat to any ship nearby, 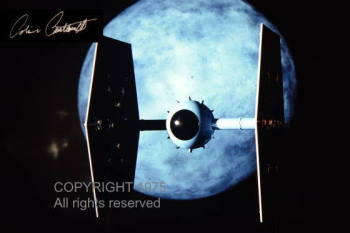