The creation of the X-Wing

The iconic X-Wing was Colin’s first star ship design. The X-Wing inspiration came from watching darts being thrown at a dartboard in an English pub. This concept was then coupled with the lightning speed of a dragster. The famous X shape of the X Wing was intended to be instantly recognizable in battle and unique to the “Star Wars” films. Effective in function, the wings remained innocently folded flat when taxiing and during take-off. In preparation for battle however, the weapon-tipped wings expanded to their signature form, the heroic rebel X-Wings.

The initial drawings show the wings fully open. However, in the battle, the X-Wing wings were partially closed to increase maneuverability during dog fights. It also had to be agile and swift in order to fly through the Death Star trench during the dramatic trench scenes. In an effort to increase tension, Colin’s idea was to create the atmosphere of a cowboy in a gunfight reaching for its guns. And within the Death Star’s armed trenches, the final battle would be fought. 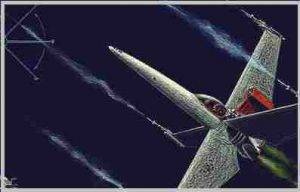