The history of the Imperial Star Destroyer

The  Imperial Cruiser was designed as an ominous space ship that would remain indelibly set in people’s minds as they watched the opening scenes. After asking George Lucas to describe his vision, he got an answer something like. “It is really big.”

Needing more clarity, Colin asked some pointed questions.  “How large should it be?” Is it bigger than Burbank?”  The response was “Yes, it is bigger than Burbank.” With this information, Colin created a never to be forgotten ship that launched the first visions of Star Wars movie series. 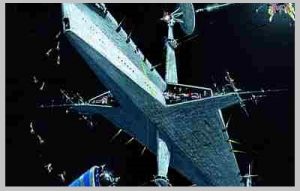